Voxman travels extensively to explore various cultures and places, and to create images reflecting his experiences. Many images are drawn from time spent backpacking and fly fishing in his favorite Northwest locations; others are drawn from travels to Mexico, Europe, New Zealand, and Cuba.

The not-so-loquatious Voxman "speaks" through artistic pursuits, in photography and in music. An avid clarinetist, he has played in chamber groups and symphony orchestras. He enjoys sharing his love of black and white photography with others. He uses a medium format camera for the majority of his photos, or a 35 mm for selected subjects. Voxman works only in "traditional" black and white, processing all his own images to obtain the final product. He prefers to leave color and digital photography to others.

Bill Voxman is a transplanted Iowan who has spent the last three decades living and working in the inland Northwest; he resides in the Palouse Country of northern Idaho. Recently retired from a 35-year faculty position with the University of Idaho, Voxman continues to pursue his passion for photography.

Voxman´s black and white silver gelatin images are found in many art galleries in the Northwest and Mid-West and in numerous private collections. His images of Indian elders from the Coeur d´Alene and Flathead tribes played a prominent role in the nationally acclaimed traveling exposition, Sacred Encounters, which was exhibited in leading museums from Los Angeles to Montreal. 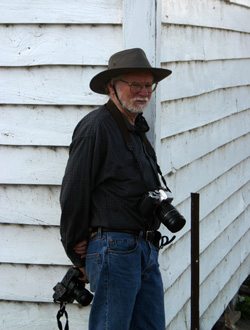